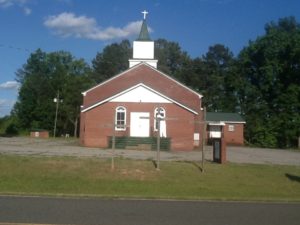 As a refuge for families to gather and uplift the name of the Lord, people began to meet on a regular basis, in a bush harbor in 1867. This is the early establishment of the Seekwell Baptist Church. This early church was located on Tyger River which was in Union County. The church was organized for the convenience of African Americans living in the vicinity of Maybinton, Goshen Hill, Tuckertown and from other surrounding plantations.

Two acres of land were given by Mr. James Henderson for the site of the church across the road.

The State of South Carolina

Know all Men by these Presents that James M. Henderson of Newberry County in the

State aforesaid, in consideration of the interest and good will,

Which U gave for the membership of Seekwell Baptisht Church

Located near Maybinton in Newberry County in the State aforesaid

Have granted, bargained, sold and released by the presents do grant bargain

Charity Whitener on the North and by the land of J. M. Henderson on the South and East

Government land, Moorman and Bean tracts to 3 and 4.

In 1982 the fellowship hall was added to the church. Reverend James Taylor was pastor during this time. Deacon Yancy Dawkins was Chairman and the Secretary of was Sis. Joycelan Tucker.

In 2005, Deacon Boisy Shelton learned of eight acres of land that was purchased by the church for the new building project. The building project lasted four years and we entered the new sanctuary under the leadership of Rev. William E. Rice on June 26th 2016.  Rev. Rice was installed on July 3, 2016. Several new ministries have been implemented under the leadership of Rev. Rice:  Women’s Ministry, Couples Ministry and Men’s Ministry.